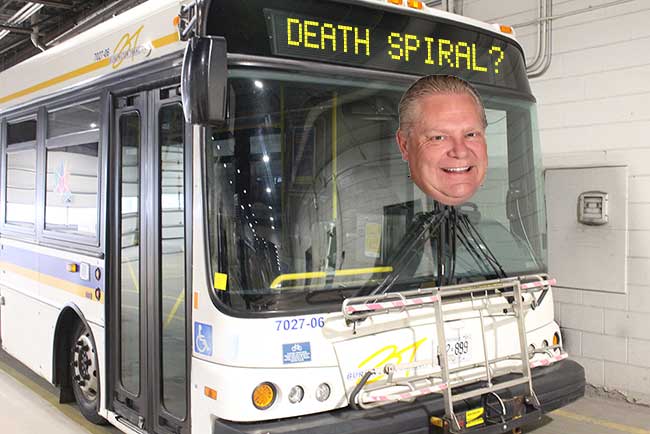 Will Doug Ford’s policies put transit into a death spiral?

This article appeared in The Hamilton Spectator, March 6th, in the run up to the provincial election. It will remain relevant until the Ford Government act to improve funding for transit operations.
https://www.thespec.com/opinion/contributors/2022/03/06/stopping-transits-death-spiral.html?rf

On Feb. 17, the federal government announced it will provide $750 million in transit operations funding to support municipalities facing transit operating shortfalls due to COVID restrictions and limits on ridership. This is the first time in Canadian history that a federal government has committed to any transit operations funding and comes after a long lobbying campaign by The Federation of Canadian Municipalities, prodded by The National Keep Transit Moving Coalition (KTM), of which BFAST, Hamilton Transit Riders Union, Hamilton Transit Alliance and Toronto Transit Riders are members.

Founded in the spring of 2020, KTM brings together dozens of transit riders’ associations, labour unions and environmental groups from across the country. The coalition seeks to attain affordable and efficient public transit for all Canadians. A major part of that goal is to bring federal and provincial operating funding to municipal transit systems as they recover from pandemic ridership and revenue losses then, hopefully, to maintain that funding as permanent policy.  So far the federal government has been cognizant of these issues and their impacts on transit across the country and has provided various tranches of capital and infrastructure funding in the hope that might alleviate the financial crunch on municipalities. But in what has been described as a “transit death spiral” by national media outlets, they have come to recognize more needs to be done, particularly on the transit operations side. This breakthrough in federal operations funding is conditional on provinces agreeing to match that funding. The big question is, while the federal government are ready to fund the rescue of struggling transit systems, will the Ontario government match that funding?

With an election in the offing KTM would like to think they might. So far, however the Ford government’s only transportation initiatives seem to revolve around highways and the car. Apparently oblivious to the struggles of Ontario municipal transit systems, they have promised billions to build more highways, or reduce tolls on a few minor 407 extensions, and on Feb. 22 they announced the great Ontario license sticker election give away. While the federal initiative favours poorer working families and low-wage essential workers who use transit to get to work and recognizes the beneficial impact of transit on climate change, the provincial initiatives favour wealthier three- and four-car families with a huge pre-election gift, while poorer working families with one car get the minimum savings and refunds. People who use public transit get nothing from the province, again punishing the poorer among us who have to use transit as well as those who choose to use public transit or active transportation as an environmental preference.

KTM members were hopeful, as no doubt were Ontario mayors and municipalities, that Premier Ford might seize an opportunity to help the “little guy” he so often claims to be on the side of. Or even see it as a chance to reward the low paid, essential workers, we hailed as heroes but who disproportionately rely on public transit to get to those essential activities. But KTM worries that the cost of his $1.1 billion licence sticker election giveaway will leave him no fiscal manoeuvring room to take the federal government up on its transit-operations funds-matching offer. This would leave transit systems throughout the province struggling to recover from pandemic losses and delay a safe return to regular services for those who most need them.

The election season is just starting, and no writ has been dropped yet so it is not too late for Premier Ford to act; to take up the federal government’s offer, to help rescue public transit systems from the much anticipated death spiral. Nor is too late for GTHA transit users to write to our MPPs or to Doug himself, who claims he is always available to phone calls from his hard-working Ontarians.