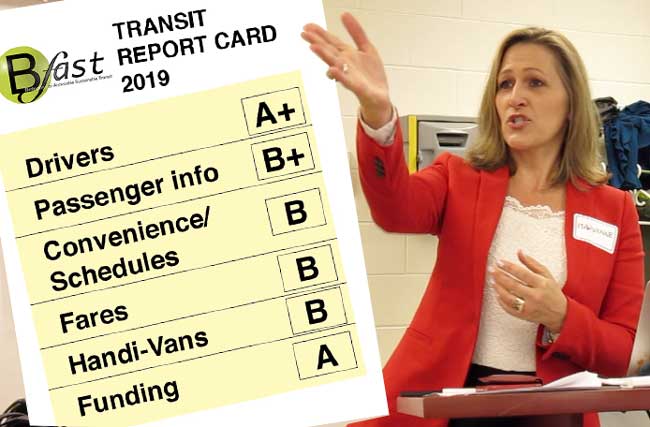 Transit users in Burlington are happy with the improvements made over the past year and eager for more changes scheduled for the year to come. That’s the main takeaway from Burlington’s Fifth Annual Transit Users’ Forum, held May 4 at the Burlington Seniors’ Centre. Another capacity crowd of more than 100 packed the meeting room as bus riders heard Mayor Marianne Meed Ward promise more improvements over the coming years. In addition to the mayor, five of six city councilors attended the meeting, showing support for a bigger role for transit as the city grows. This year’s transit report card, an annual feature where riders vote on various aspects of the system, reflected the new optimism, with a much improved overall grade. “You are the reason why transit is better in this city,” Meed Ward told the attendees.

“We have made some incredible strides forward on transit” in the 2019 city budget, she said. She thanked Council members for their support for free transit for low-income riders and for supporting an 18-month pilot project that will see seniors travel free in off-peak hours. “We’re going to make it permanent,” she stage whispered. “We want people to be able to choose transit because it’s the best way to get around our city. We are not there yet,” she said. “But the bottom line is that none of these changes would have happened without your advocacy. And along the way we’ve had some bumps. So I’d say, ‘Just hang in there. Keep advocating. Keep talking about transit.’ You did. You never stopped. And because of that, we’re here today with such great news. And there’s going to be more. We’re not done. This Council is just getting started in making sure that transit is the transportation option of choice.” She thanked BFAST for activism on behalf of transit. “You have been in the trenches advocating for a long time, when it wasn’t a very popular message,” she said.

BFAST Chair Doug Brown praised Council’s new commitment to transit but reiterated Meed Ward’s sentiment that “we’re not there yet.” He pointed out that Burlington would still be below the GTA average municipal per-capita contribution to transit after this year’s budget increases.

He said BFAST rejects the recommendations of a transit consultant hired by the old Council that the city must choose between coverage of all areas and more frequent service on main routes. “Burlington needs both,” he said.

He also asked that the city meet its own long-established transit-service standards for frequency and availability.

Brown once again urged that the city examine transportation as a whole, rather than isolate elements like roads, parking and transit. He pointed to studies by Waterloo Region and the Canadian Urban Transit Association that showed transit can save cities money on road work and bring huge returns on investment for the local economy.

“We do take that feedback and we do look at it. We make service changes about six times per year so there are opportunities to change something that’s not working right.” More than half of the meeting was given to the users themselves as they made comments and asked questions to a panel made up of Ward 4 Councillor Shawna Stolte, Connor, BFAST Steering Committee member Glenna Cranston and Burlington bus driver Slawomir (Swav) Ozog.

Stolte said that after she was elected, she was researching other transit systems and came across an American article featuring the significant improvements made to transit in Brampton, where Connor was director at the time.

“We are so lucky to have Sue [Connor],” she said. “And what I am personally committed to, and I know the rest of Council is, is to working hard with Sue and to making sure that our Burlington Transit system is also one that eventually gets written about in articles across North America as a premier, leadership public transit system that’s working well for everybody.”

Questions and comments came thick and fast on everything from electric buses to getting younger people to ride transit to service problems. Stolte noted that Connor took pages of closely written notes from the session. Connor herself promised that she would take the comments to a meeting of transit staff in the coming weeks.

The meeting also heard greetings from Burlington MPP Jane McKenna, who said the provincial government looked to forums like this to point the way for action on transit. Halton District School Board Chair Andréa Grebenc and provincial NDP candidate Andrew Drummond also attended. Attendees also paid tribute to Mike MacDonald, a transit activist and BFAST member who passed away recently.

This year’s forum was endorsed and supported by 14 community organizations.